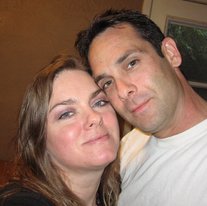 We are Mark and Kim, a married couple who became pregnant and lost both our jobs, all within a matter of months in 2010.

Like many people, even while working we didn't have money for anything like entertainment. We had a garage full of interesting stuff - or full of junk, depending which one of us you talk to - that was mostly the result of years of thrifting. We had recently begun selling off this hoard to enjoy some of the finer things like Sunday brunch downtown. We made $100 our first week! Having no idea what we were doing, we just started everything off at $9.99, posting once a week. After a short time of making decent money selling off junk, we ran out of junk to sell. We were hooked. We had to get more junk! But still we didn't really know what we were doing. Our weekend routine was typically driving around somewhere looking for something to do. So we just decided to make it garage saling. We bought on instinct, with a per-item spending limit of $5. We did pretty well.

We did some research online on things we thought we might find, but you just never know at a garage sale. Like how should we know to prepare for the Chinese cupping set (which the homeowner thought was a penis enlarger and was afraid to sell us). We didn't know what it was called at the time, but we knew $2 for whatever it was would be a good deal. Or the box of half a dozen vintage handheld computers, totally state-of-the-art for their time, for $5 apiece, belonging to a real estate professional of some kind. Just somebody's dad's old junk worth $75+ apiece.

Here we are with no income except unemployment, a baby on the way, and no reasonable prospects in sight. We just decided to see how much money we could realistically make on eBay. We started to up our game with technology and spending, little by little. We tested a lot of different types of products, selling techniques, and locations. And we have been making a living on eBay since then. We often get asked by others how we do it. So we created this site to give you the tools and tips that help us succeed. Enjoy!